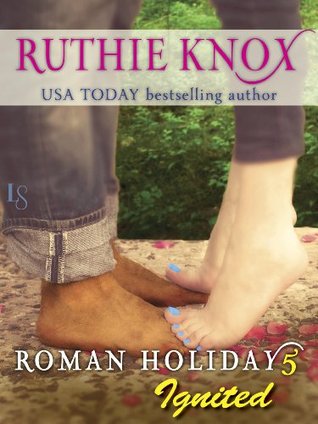 If you haven't read the previous 4 parts of the Roman Holiday installment - you shouldn't read my review of the fifth and last part...  (Here is the review of the first one / second one / third one / forth one)

Before you begin reading don't miss out the sweet preface by Ruthie also containing a reminder to the three previous installments.

Oh my.. first off let me tell you I feel like crying that we have to wait now till March for the rest of the book.. I admit I was really anxious about how this one will end. I was afraid it will be something of a "cliff hanger" or that Ruthie will leave us right in the middle of things, especially after reading the 4th one - Ashley and Roman are actually in the beginning of their road trip. There are 10 more days to their deal so there is a lot still to happen (after all we are only in the middle of the book..) but the way it ended I just closed the kindle cover with this hopeful smile on my face and felt "I can do this! I can wait!" because I felt that it was exactly the right place to put us on hold. Don't get me wrong - I would LOVE for the next installments to be released in the following weeks! But well, what can we do BUT wait? :)

So what's up with Ashley and Roman? Well, first off they are still camping, now someplace else than before. They are meeting two brothers who came to Ashley's grandmother's vacation rentals in the past. As it was before - It doesn't really go as she expects. She starts to feel like she is losing the "fight" and she realizes she has no choice but to look into the boxes in the trailer and see if she can find something that can explain her grandmother's decision or something that might help her against Roman and the deal he made with her grandmother.

Roman sees Ashley's difficulty in dealing with her grandmother's personal staff. He tries to help her "his way" - breaking her up so she can rebuild herself better and stronger but it leads to two things Roman didn't want or think will happen - First he couldn't bring himself to really hurt / break her. Second he blurs out her grandmother's reasons for selling the vacation rentals (reasons he was bound to keep to himself). I can tell you it's not what I thought.. and it really left me with a bump in the chest.

To try and get herself out of this dark mood Ashley takes Roman to this abandoned city nearby. There they sit and have a talk. Well, actually Roman does most of the talking and he just broke me to little pieces I have no idea how I got myself pieced out back together again.. and it wasn't just what he said to her, it was their interaction during this whole scene that was just perfect (though heart crashing).

Roman has another talk with Carmen after that. I won't discuss what they talked about (well, you are welcome to guess :D) and I just really can't stand her. Roman is infuriating in his closed up and cold way - yeah, he is - but she is a whole different (and much higher) level! But as before, I loved how Roman was throughout the scene. How he is loyal to himself and what he believes in, he is loyal to his promise to Ashley.

From here on we are going to see a change in their relationship, they have been through too much already and they can't ignore how they feel about each other. I'm not talking love here, I'm talking about friendship, kinship that cannot be ignored. I CAN'T WAIT to see their relationship evolving!

I LOVED LOVED LOVED this part. The scene together on the steps in the abandoned city was just amazing. We get all the pieces of Roman's life together and not only to our "silent" ears but to Ashley hears it too. So she can finally GET him and also find similarities between her life and his even if they had a total different up bringing and couldn't have gone through life in a more opposite way.

Oh! one last thing I almost forgot! In the end we got a really small snippet of the 6th part! YAY!

Additional Details: Kindle Ebook, 67 pages, 9 December 2013 / On GoodReads
ABOUT THIS SERIES
Roman Holiday by Ruthie Knox isn't a series it's a whole contemporary romance book that was published in 6 parts (each about 40-60 pages). Originally planned to be published in 10 parts. First 5 parts were published weekly then there was a break of a few short months and following that 5 more parts were suppose to be published but for some reason they were all published together as parts 6-10. Now, you can either buy Part 1 (chapters 1-5) and Part 2 (chapters 6-10) separately or you can buy the whole book combined.