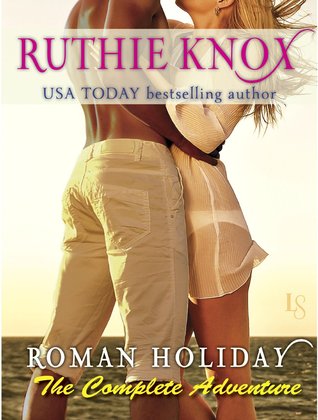 Well, well, well, A LAST we have the missing half of the Roman Holiday "series". This book was published originally in parts. First 5 parts were published weekly (were sold separately but now can be purchase as a bundle "The Adventure Begins") and then we had a short break until the next 5 parts were scheduled to be published one week after another. For some reason Ruthie published the the next 5 chapters (6-10) as one bundle called "The Adventure Continues". Well, I'm an impatient person so naturally I was VERY happy I could get the whole story in one and not having to wait..

So now you can choose if you want to buy the whole bundle "The Complete Adventure" or but it in parts, whatever you feel like it. but anyhow just do yourself a favor and BUY IT no matter in which format! :)

I don't know where to begin this review.. I already did the first 5 parts so I don't know if I should summarize them before I continue to the "second part" (meaning parts 6-10).. I guess I'll start by explaining a bit about the story itself.

We have Roman who is a contractor. He bought an old vacation rentals that he planned to demolish and built a fancy reserve in it's place. This project means a lot to him since it is a project he does with a man he values and has been there for him for years (even if he's not the "loving" kinda guy) and also he plans to marry his daughter whom he's been dating for a while now.

Sadly things don't really go according to plans as Ashley (the grand-daughter of the woman who sold Roman the vacation rentals) chains herself unto a tree not willing to let him demolish the only place she called home.

Ashley offers Roman to go on a road trip with her to make him see why the rentals should be kept and what sentimental value it holds even if these rentals aren't the most beautiful and sophisticated as they build now.

Well, Ashley's plans doesn't go according to her plan as well.. Ashley drags Roman to her grandmother's friends around the country determined to show him that people want the rentals to stay as they were but actually she gets the opposite reaction and she also gets a really nasty mirror put in front of her face making her doubt herself even more.

But don't think this is a sad story! first off it's not! It's a love story between Roman and Ashley you could say - against all odds - they ARE enemies where the rentals are concerned but they are also total opposites. He is a closed cold person and she is warm and open. But maybe because of that what we see in both of them and what they bring in each other makes them the perfect couple. Their adventure is not just about demolishing the rentals it's about finding themselves as well.

If I do want to try and separate the "two" parts, I'd say that the first 5 parts are more about putting the ground rules, Roman and Ashley getting to know each other and the next 5 parts are of them becoming a couple.

One thing I have to add - Carmen - The woman Roman was suppose to marry, I started of by hating her SO much! But Ruthie has her way with words making these real characters with flaws and a story you can't help yourself you somehow relate to them, get them. No one is perfect, Carmen is no different then any other character in this story and when the story is concluded and you get her whole angle on the world and what she endured you start to like her (a little :P).

OH! and I forgot one other thing! One of the last places Ashley takes Roman to is in Camelot.. :) If this means nothing to you - feel ashamed and go sit in a corner! Camelot is another fabulous series by Ruthie!  Well, I love everything by her. I've read everything she has published, including the one written as "Robin York". She is my absolute favorite author!

Nothing left to say except for - HIGHLY recommended!

Additional Details: Kindle Ebook, 516 pages, 26-29 March 2014 / On GoodReads
ABOUT THIS SERIES
Roman Holiday by Ruthie Knox isn't a series it's a whole contemporary romance book that was published in 6 parts (each about 40-60 pages). Originally planned to be published in 10 parts. First 5 parts were published weekly then there was a break of a few short months and following that 5 more parts were suppose to be published but for some reason they were all published together as parts 6-10. Now, you can either buy Part 1 (chapters 1-5) and Part 2 (chapters 6-10) separately or you can buy the whole book combined.