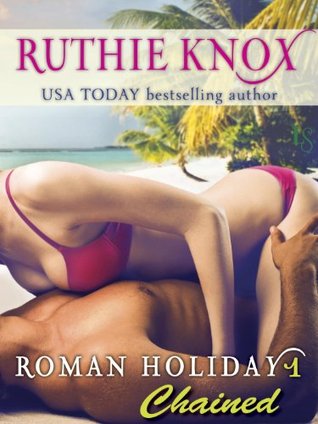 I have to say that though I do have some good qualities I'm definitely lacking in restraint and patience... So for me to be limited to 50 pages a week for a book I REALLY want to read ( = anything Ruthie writes..) isn't exactly how I like to run things.. On the other hand it does keep you on your toes and of course it might mean I will accomplish more per day since I won't be buried inside the book ignoring the world around me ;) all in all I think that this concept (starting with Truly on Wattpad which is still available for free till the end of the year) is interesting - I salute Ruthie for the unique idea!

Now for the "novella" in hand! We get a glimpse of Ashley - as the title hints - chained to a tree - no-one chained her - she chained herself! She is making a stand against Roman the developer who wants to tear down the place she calls home. Ashley's grandmother used to own these vacation rentals, now not looking their best.. but for Ashley this is the only place she felt at home. She doesn't understand why her grandmother sold the property and didn't leave it to her in her will.. But nevertheless she is determined to fight Roman until she gets what she wants!

Roman is a cold developer from Miami. He want the vacation rentals removed but he can't do it while Ashley is chained to that damn tree! He can't afford the media's negative attention and he is not willing to risk something happening to Ashley while he tears down everything around her - not because he is such a sweet man - because something happening to Ashley will mean - bad publicity - no, it's not worth it.. especially when his plan for the area is huge and also is a part of a very big agreement he has with a very powerful man Roman doesn't want to cross (and not only because he wants to marry his daughter..)

So it's either Ashley backs down and unchain herself - how long can she last with no food or water? no shelter form the sun and rain.. or it is Roman who backs down and gives her a chance to show him the rentals are more than a dump to be demolish.

Additional Details: Kindle Ebook, 48 pages, 25 November 2013 / On GoodReads
ABOUT THIS SERIES
Roman Holiday by Ruthie Knox isn't a series it's a whole contemporary romance book that was published in 6 parts (each about 40-60 pages). Originally planned to be published in 10 parts. First 5 parts were published weekly then there was a break of a few short months and following that 5 more parts were suppose to be published but for some reason they were all published together as parts 6-10. Now, you can either buy Part 1 (chapters 1-5) and Part 2 (chapters 6-10) separately or you can buy the whole book combined.