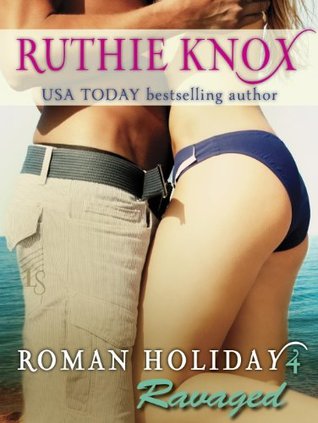 If you haven't read the first, second and third Roman Holiday installment - you shouldn't read my review of the forth part...  (Here is the review of the first one / second one / third one)

Before you begin reading don't miss out the sweet preface by Ruthie also containing a reminder to the three previous installments.

In this part, Roman and Ashley start their "Roman Holiday" with the first couple who has been coming to Ashley's grandmother's vacation rentals for several years. She intends for Roman to see for himself that soul is more important than luxury. Let's just say it doesn't turn out as she expected...

Though Ashley is making Roman do this trip and though she is mad at him for wanting to take her home from her, and from his point of view though Ashley is trying to take away his bright future and making him take this uncomfortable road trip - they both start caring about each other in their own way. When Roman makes her upset he regrets it immediately and when she feels like she is pushing him too hard she tries to make the trip more control-able for him.

There is also a steamy and dirty (with double meaning here ;)) between Roman and Ashley that leads to a conversation between him and Carmen. I"m sorry to say it like that be she is SUCH A BITCH! How convenient for her that Roman is a little unfaithful... She doesn't give the slightest fuck about Roman or what he does or with whom. but as it seems Roman feels about nothing towards her as well..

"
He tried to imagine Carmen beneath another man. Another man’s mouth on her breasts. Another man’s dick inside her. Roman waited for his pulse to quicken, his fists to clench. Nothing happened.
[...]
He thought of Ashley then with another man between her thighs. Ashley in the bathroom, upset, probably crying.
He stood up.
“What’s the matter with you?” she asked. “You look like you want to do some pillaging.”
“I’m fine.”
He smiled back at her, but it was the smile she didn’t like, and her face fell.
He crossed his arms and shifted from one foot to the other.
He wasn’t fine.
Roman was so far from fine, he doubted he could find it on a map.
"

I must add that I'm taking an educated guess here that the next book in the series will be of Carmen and Noah. As I know Ruthie and her writing I'll probably fall in love with her (and Noah) when I get her side of the story. But right now - GOD I hate her! and I applause Roman for being who he is and also for how he behaves. He cheated, yes, I hate people who cheat! But at least he is man enough to admit it. without being provoked to.

After they depart from the couple they start their drive to their next location - first stop for the night - a camping place in the woods. While Ashley organizes their things Roman goes for a walk in the woods (he walks, he doesn't hike..) and while walking we get a glimpse into his past. We understand Roman housing situation as a kid and in a way why he is no longer in touch with his adopted family. This glimpse left me heart broken. I can't wait for Ashley to "do her magic" on him and tear down his walls and surround him with her sunlight.

I really loved this part since we are unraveling Roman's past, why he is the way he is and also we see how Ashley in her own way breaks him down, makes him feel after years of not feeling anything.  He is affected by her. He doesn't want her to be unhappy even though it means he is "getting what he wants" or maybe I should say what he's suppose to want.

Additional Details: Kindle Ebook, 60 pages, 4 December 2013 / On GoodReads
ABOUT THIS SERIES
Roman Holiday by Ruthie Knox isn't a series it's a whole contemporary romance book that was published in 6 parts (each about 40-60 pages). Originally planned to be published in 10 parts. First 5 parts were published weekly then there was a break of a few short months and following that 5 more parts were suppose to be published but for some reason they were all published together as parts 6-10. Now, you can either buy Part 1 (chapters 1-5) and Part 2 (chapters 6-10) separately or you can buy the whole book combined.