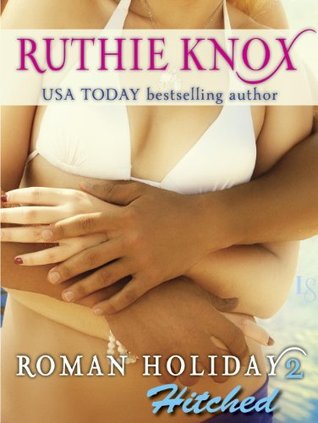 My god I just laughed and laughed this one out.. my dog here was VERY annoyed - what should a dog do to have his precious evening nap WITHOUT all those shouts of laughter! Jeez!

So "this week" we continued our Roman Holiday adventure - Roman and Ashley are on their way to her grandmother's friend Mitzi. Most of the story is them on their way there. Ashley torments Roman literally 99.9% of the way - which he deserves! He is so anal and have to be in control of everything I LOVE him! (not because I could EVER handle anyone like him because I find that totally adorable! :D). To put it in his own words: "Of course she is a vegetarian, Because she's been put on the earth to plague him". Roman doesn't want to yield to Ashley's torments but deep down inside it seems that somehow they do something to him even if it's VERY little. Ashley on the other hand hates his gut! but she can't ignore the fact she is attracted to him - even if she doesn't want to be. Ashley is such an opposite to Roman. While he is closed and cold, she is open, sincere and full of emotion. I can't WAIT for them to hit it off!

Oh! and don't you dare miss the beginning of this part - as in the first one we have hilarious preface by Ruthie. In the first one it was just a preface but here it's also a reminder of what happened in the previous chapter.

Additional Details: Kindle Ebook, 57 pages, 26 November 2013 / On GoodReads
ABOUT THIS SERIES
Roman Holiday by Ruthie Knox isn't a series it's a whole contemporary romance book that was published in 6 parts (each about 40-60 pages). Originally planned to be published in 10 parts. First 5 parts were published weekly then there was a break of a few short months and following that 5 more parts were suppose to be published but for some reason they were all published together as parts 6-10. Now, you can either buy Part 1 (chapters 1-5) and Part 2 (chapters 6-10) separately or you can buy the whole book combined.