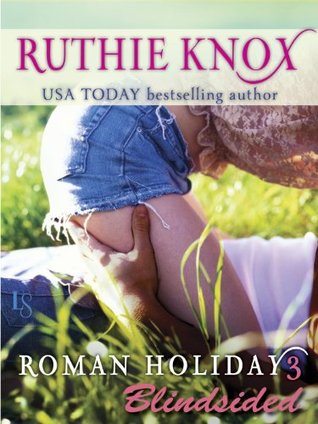 If you haven't read the first and second Roman Holiday installment - you shouldn't read my review of the third part...  (Here is the review of the first one / second one)

Before you begin reading don't miss out the hilarious preface by Ruthie also containing a reminder to the two previous installments.
In this part we have Roman stuck, or rather his truck is stuck in the swamp - making it impossible for Roman to get away from Ashley - to get back to what he HAS to do - start demolishing Ashley's most prized home. Both of them feel a little different about each other. Roman finds it hard to ignore his attraction to Ashley (though he doesn't understand it..) and Ashley starts to realize she doesn't want to tear down Roman on her way to save her home - she just really want him to UNDERSTAND her point, to SEE what this place is, what it was and what it could become - she offers Roman an offer he can't refuse to do just that. We have a little of Carmen's POV and more of Roman's background and it's pretty clear why Carmen and Roman are together now but it is obvious why it can't last.


I liked this one less than the others. I'm not saying it wasn't good it was a little less humoring than the previous two though it does have a good one in the beginning when Roman "joins" (=watch) the drum cycle, as Ashley describes it: "Eventually he'd come in - much to the delight of the assembled guests. There was nothing quite so exciting to the vegan residents of Okefenokee as fresh meat" and we feel how much exciting when Roman encounters their "pet" gaitor :D

Additional Details: Kindle Ebook, 55 pages, 26 November 2013 / On GoodReads
ABOUT THIS SERIES
Roman Holiday by Ruthie Knox isn't a series it's a whole contemporary romance book that was published in 6 parts (each about 40-60 pages). Originally planned to be published in 10 parts. First 5 parts were published weekly then there was a break of a few short months and following that 5 more parts were suppose to be published but for some reason they were all published together as parts 6-10. Now, you can either buy Part 1 (chapters 1-5) and Part 2 (chapters 6-10) separately or you can buy the whole book combined.