One Grave at a Time (Night Huntress #6) by Jeaniene Frost 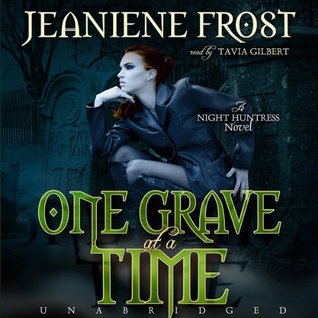 I didn't really get invested in this one. I'm not sure what the "problem" was, it wasn't, well, engaging. Cat and Bones are a real married couple now, their life is quite settled, they have their friends - Spade, Denise, Ian - that help them out (no sign of Vlad and Mencheres in this one which is a shame..) There was no "major crisis" for any of the characters, while Ian is always a star with everything he says and does he didn't help the book be more appealing.


There is a "big deal" with the one replacing Don (not Tate as they thought) and so there is more material for the next book, but actually come to think about it, I would rather skip this book and have all the "big bad" of Madigan (Don's replacement) in the last book. I must say I really dislike Don and how he manipulated Cat in the past and as it seems still does in the present, keeping staff from her. He clearly knows Madigan and knows he is up to no good but he won't share his knowledge with Cat. So tell me, why is he still around as a ghost when he has no real purpose? He doesn't do anything, he doesn't help and he is more in the way since Cat thinks he is trying to help her while he clearly doesn't.

This book felt like - bones without the meat (pun intended..). There was nothing really important in this book aside from meeting Madigan. The story line itself is of Cat and Bones helping Elizabeth (a friendly ghost and Fabian's love interest) get rid of a killer ghost that materializes once a year to kill women he considered to be witches.

I wish there was more to this one, more funny Ian, more of Cat and Bones being fun and games and less being husband and wife in a too sugary and sticky way. I find I can't stand their lovey-dovey moments especially when Cat keeps praising Bones' looks. He's a guy.. stop telling us how pretty he is ;)

So yeah, ,my least favorite book. Now, timeline-wise, there is a "break" in their story line moving to the spin off trilogy of Vlad Tepesh (my absolute favorite PNR character and books). After the first two of Vlad - the last installments in the Cat and Bones series was published (a short novella and then the final book). I'm STILL waiting for the last book in Vlad's series no be published in January 2015

Additional Details: Audiobook, 9:06 Hours, 14-18 August 2014 / On GoodReads
ABOUT THIS SERIES
The Night Huntress is a great, action packed, funny and romantic Urban Fantasy Series by Jeaniene Frost. The Series follows Cat the half breed Vampire and Bones her Vampire lover. Together they fight humans as well as mythological creatures (like other Vampires, Ghouls, Ghosts and more). The Series contains a total of 7 full novels and one short novella finishing their story line. Besides these, there are also 2 more short novellas, one of Bones before he met Cat and another of the both of them with no real connection to the main plot line (published after the 4th novel). There is no significant to the series in reading these two. After the series was finished another book was published - Outtakes from the Grave containing a "Director's Cut" of deleted scenes and alternate versions.

There are a few more outside novels listed as "Night Huntress World". Two short novellas of outside characters (Happily Ever After & Devil to Pay) with no significant or relevant to the Night Huntress series as well as two full length novels of Charles and Denise - First Drop of Crimson / Mencheres and Kira - Eternal Kiss of Darkness. I inserted those books in the right reading / publishing order in the list bellow. Even though you don't have to read them to understand Cat and Bones' series, the two full length novels explain how the two couples came together and mind you, both of them are GREAT! :) They have a different feel to them since they have alternation POV of the MC and also, naturally they are not Cat and Bones, yet it is in their world and there are "guest appearances" of our favorite characters.

There are two spin-off series to the Night Huntress World. First "Night Prince" of Vlad the Impaler finding his HEA with Kira which is currently my absolutely FAVORITE PNR / UF books! Second is "Night Rebel" of Ian and Veritas these are superb as well! While these two sub-series can totally be read as "stand alone" series, just bare in mind, characters from all over the Night Huntress World at times make an appearance. I don't think it's necessary to read them if you don't feel like it though.
I really recommend this series to all PNR and UF lovers. Though Cat CAN be a overly stubborn and sometimes childish she is one hell of a Grim Reaper (with red hair :)). She kicks ass, and it's always fun reading of a strong woman who can handle her opponents as well as hold her liquor. I enjoyed the extra "Night Huntress World" novellas but mostly loved the two full length novels of Cat and Bone's friends as well as Ian and Veritas' spin-off. The absolute joy, the cream and the cherry as well as the chocolate cake and banana muffins are the Night Prince novels. MY GOD I don't know how I lived before reading them..
Books: